Work commitments meant Dave and I had to head to the Ecrins before the rest of the club, arriving in a very hot Argentiere la Bessee the first week of July. We based ourselves at the beautiful Maison Abeil for the first few days while we got our bearings. After arriving Monday evening we headed to Les Collets for a bit of cragging. The next day we headed to Ailefroide to get some tips on what was in condition at the guide’s office and climb the lovely A Tire D’Aile Froide (5c).  By 10.30am  the next morning the thermometer was at 37 degrees in the valley, so we headed up into the mountains to acclimatise and read some guidebooks. 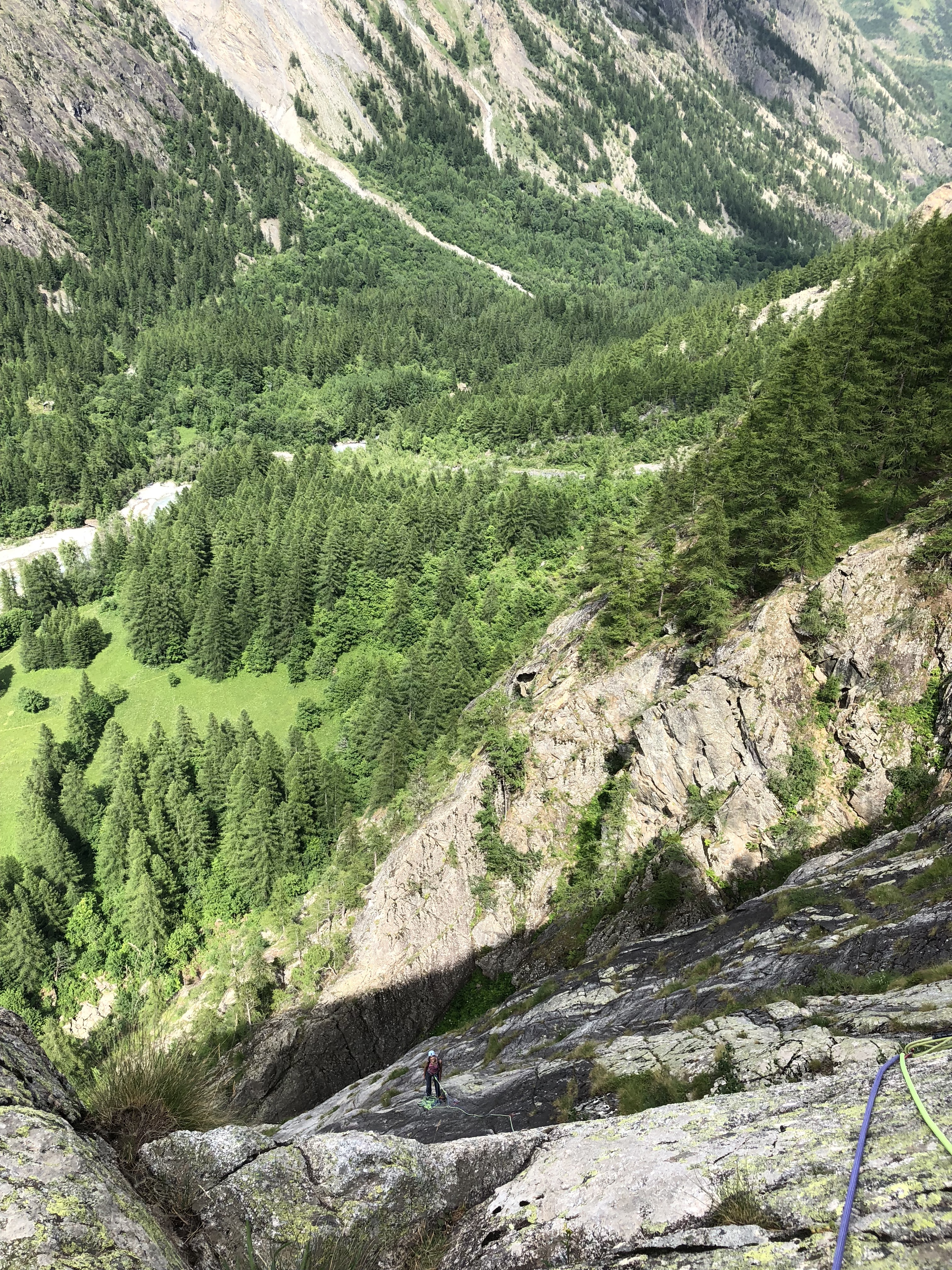 The La Grave telephrique opened in full on Thursday so we took the first one up with the intention of climbing the west summit of the Rateau. The weather was looking unstable and the snow was hard going after the recent high temperatures, so we switched objectives and headed for the Pic de la Grave. After fruitlessly trying to find a decent snow bridge across the bergshrund we abandoned this objective and had a picnic atop of the Dome de la Lauze (F) and headed back into the valley before the bad weather hit.

On Friday we took advantage of the lingering mizzle and walked to the Pave hut. Idyllic alpine meadows full of flowers, butterflies and marmots gave way after a few hours to a monochrome slog into the cloud up a seemingly interminable moraine. After nearly 5 hours we reached the Pave hut – despite being a basic metal prefab with a hosepipe bringing water from the glacier its only luxury,  it is one of the cosiest huts we’ve stayed in. We were the only guests that night and the guardian Sophie gave us a warm welcome. After a leisurely start the next morning we climbed the Pic Nord des Cavales (PD+), a superb route on excellent rock with some amazing positions. We were lucky enough to have the whole route to ourselves and the only other voice we heard was that of a lone French paraglider. We found that a single 50m rope was sufficient for the descent. We arrived back to a hut at full capacity, with beds being made up in a little cave outside the hut and in a storage area. A new bigger hut (with the same number of beds) is to be built next year. After walking down from the Pave the next day and eating enormous ice creams in the Restaurant Les Glaciers we headed to Chalet Mournier in Les Deux Alpes to take advantage of their pool and sauna. 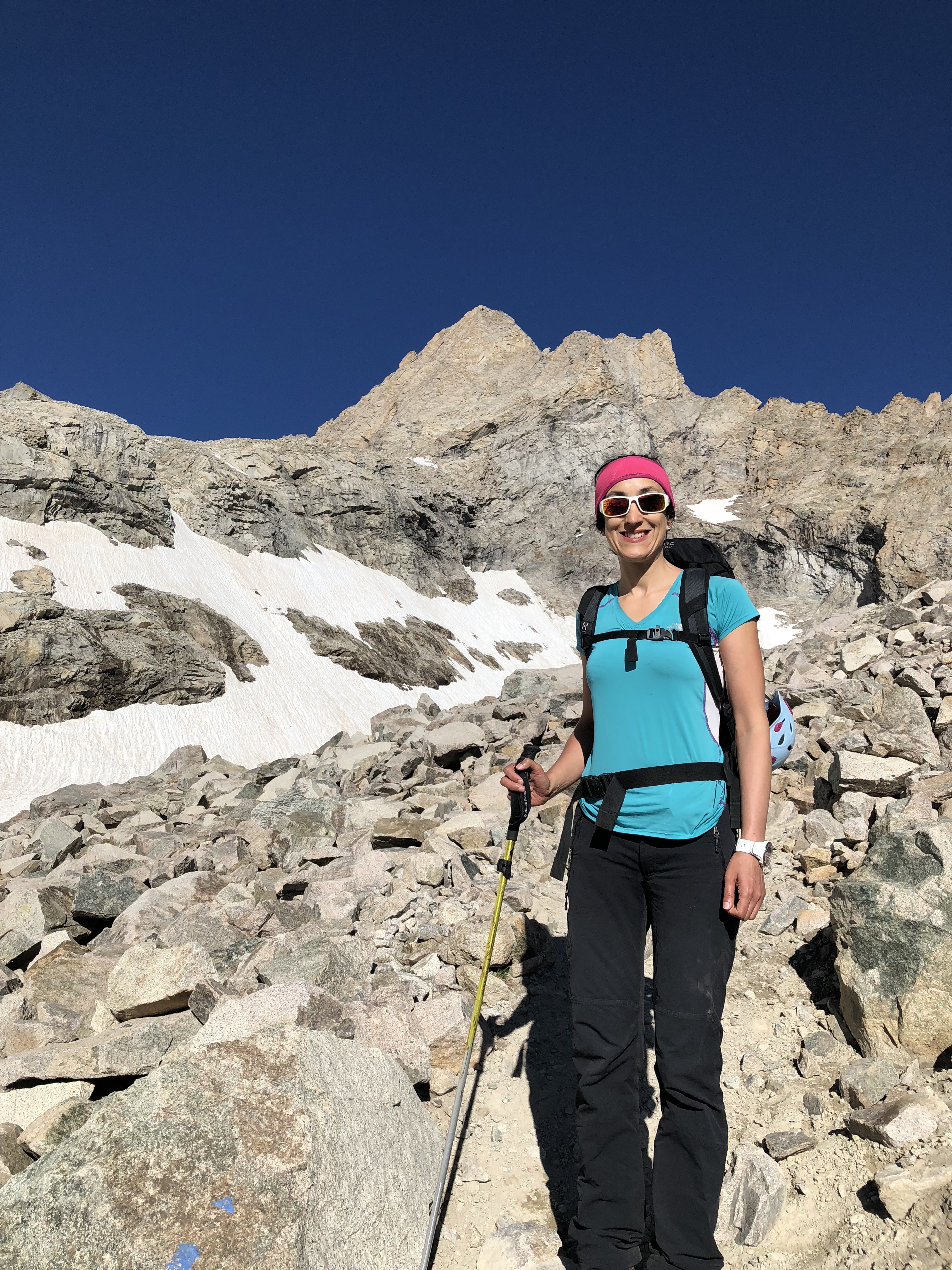 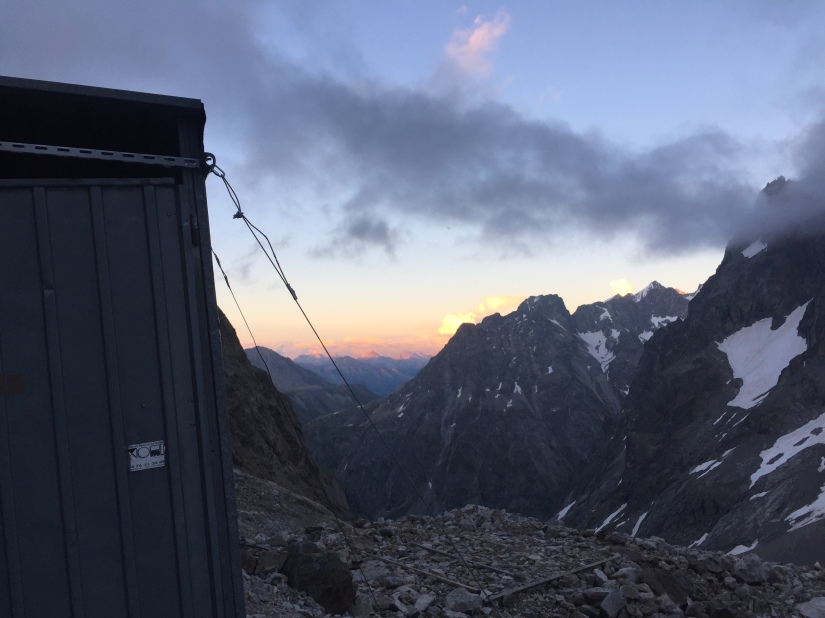 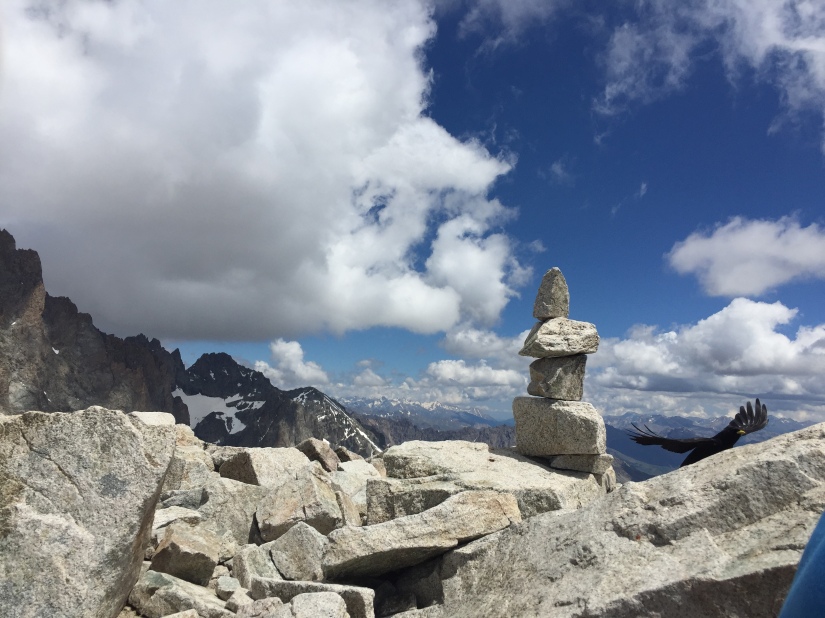 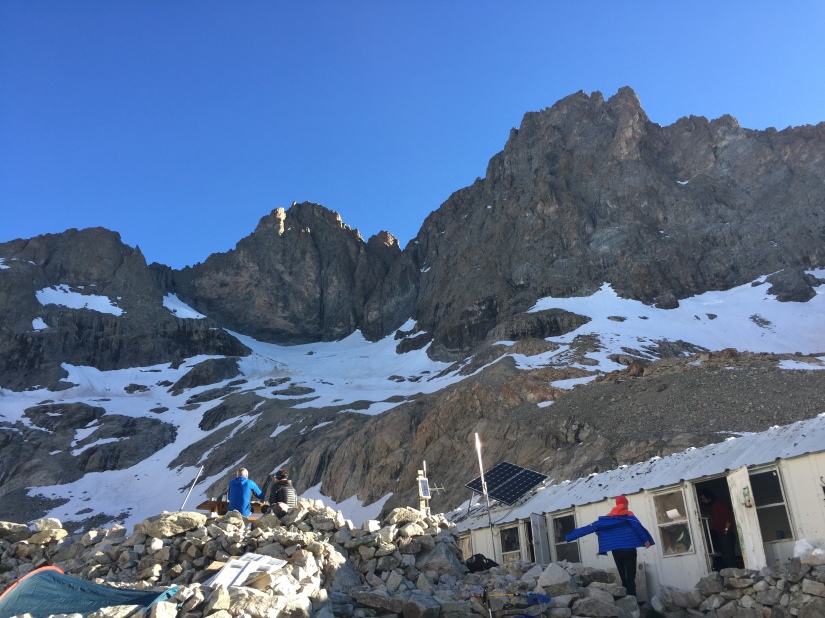 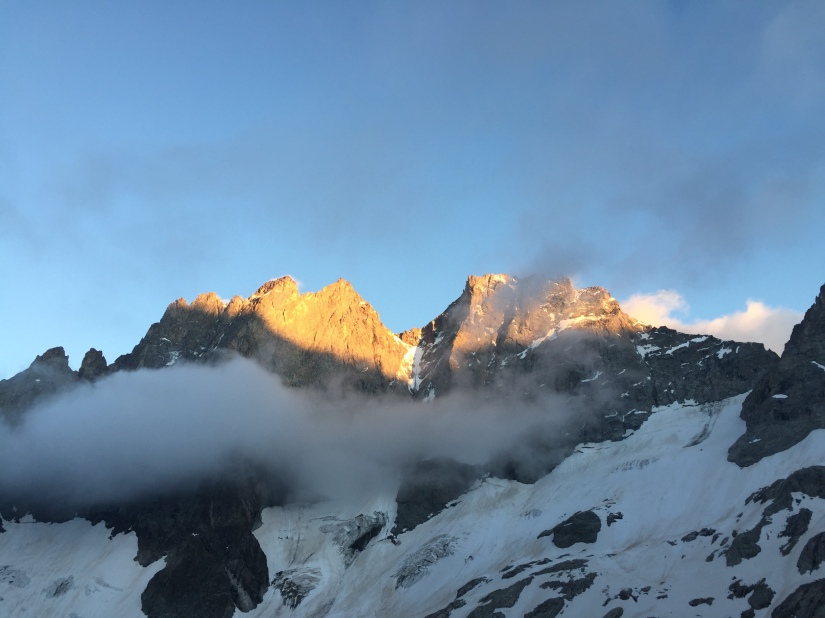 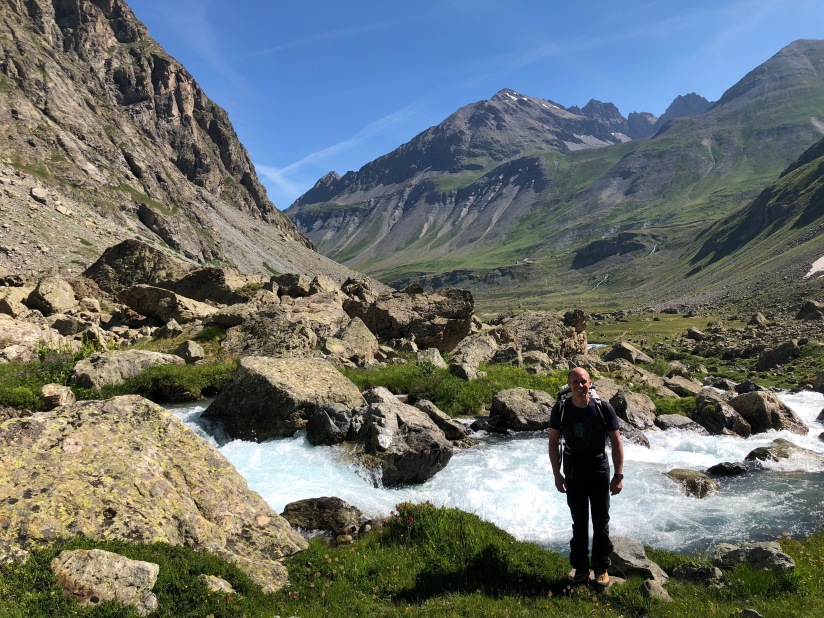 Monday saw us walking into the Soreiller hut, nestled at the foot of the Aiguille Dibona, a perfect needle of rock which compels you to climb it. With feet in a bad way after the epic walk down from the Pave, we took the walk at a lazy pace and after 3 hours reached the hut. There we met with a French guide and the next day climbed Visite Obligatoire (TD+), enjoying pitch after pitch of astonishing rock, although some sections felt hard with a rucksack. A shoe-related incident meant that close to the top, once all the difficulties had been overcome, we ended up taking in a few pitches of the mountain’s other classic route the Voie Madier, before rejoining our route for the final hard pitch and then taking the easy ground to the summit. After returning to the hut we decided to stay an extra night to give our feet chance to recover and were rewarded by an impromptu concert by a band of travelling folk singers who travel hut to hut. 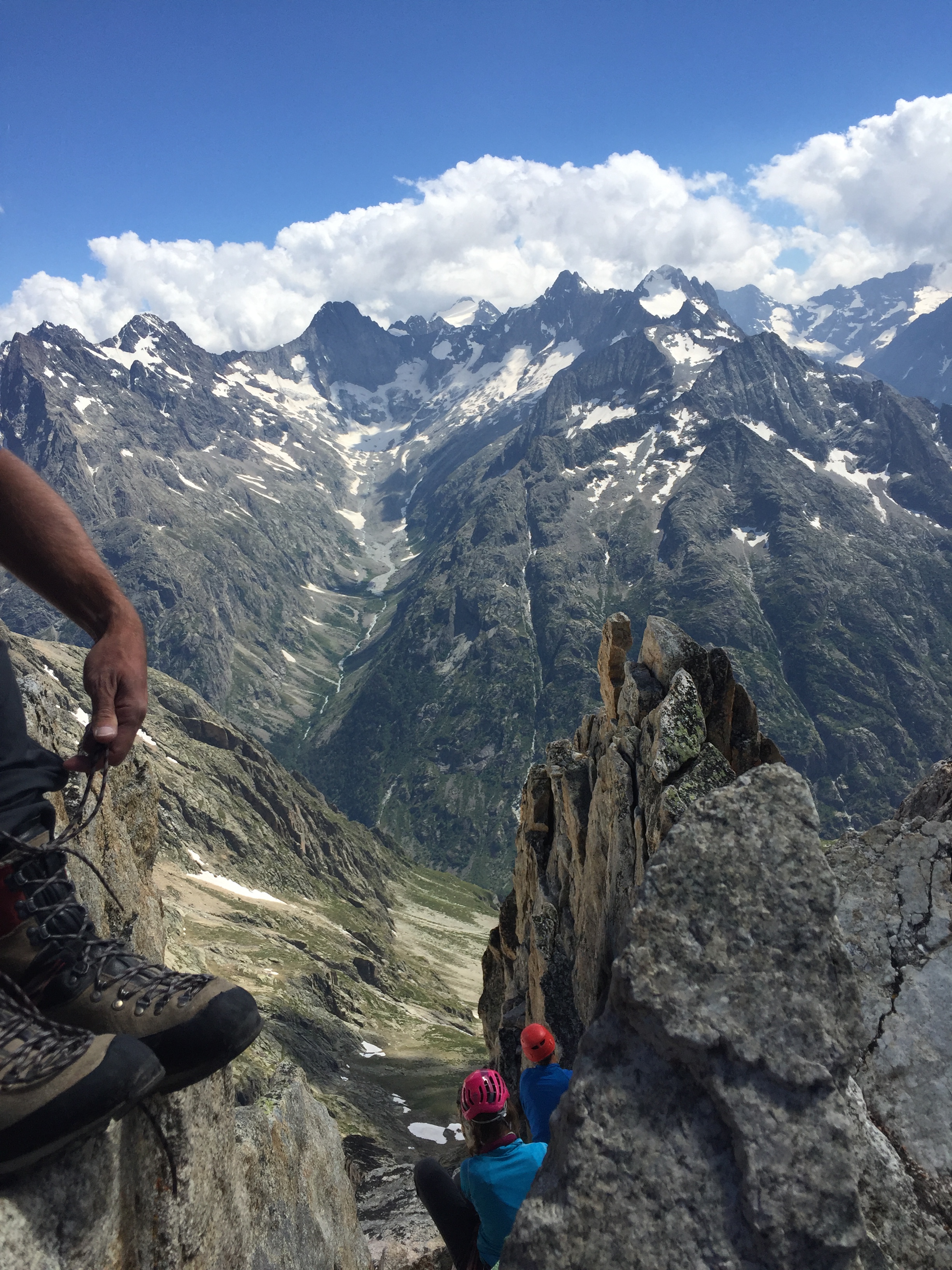 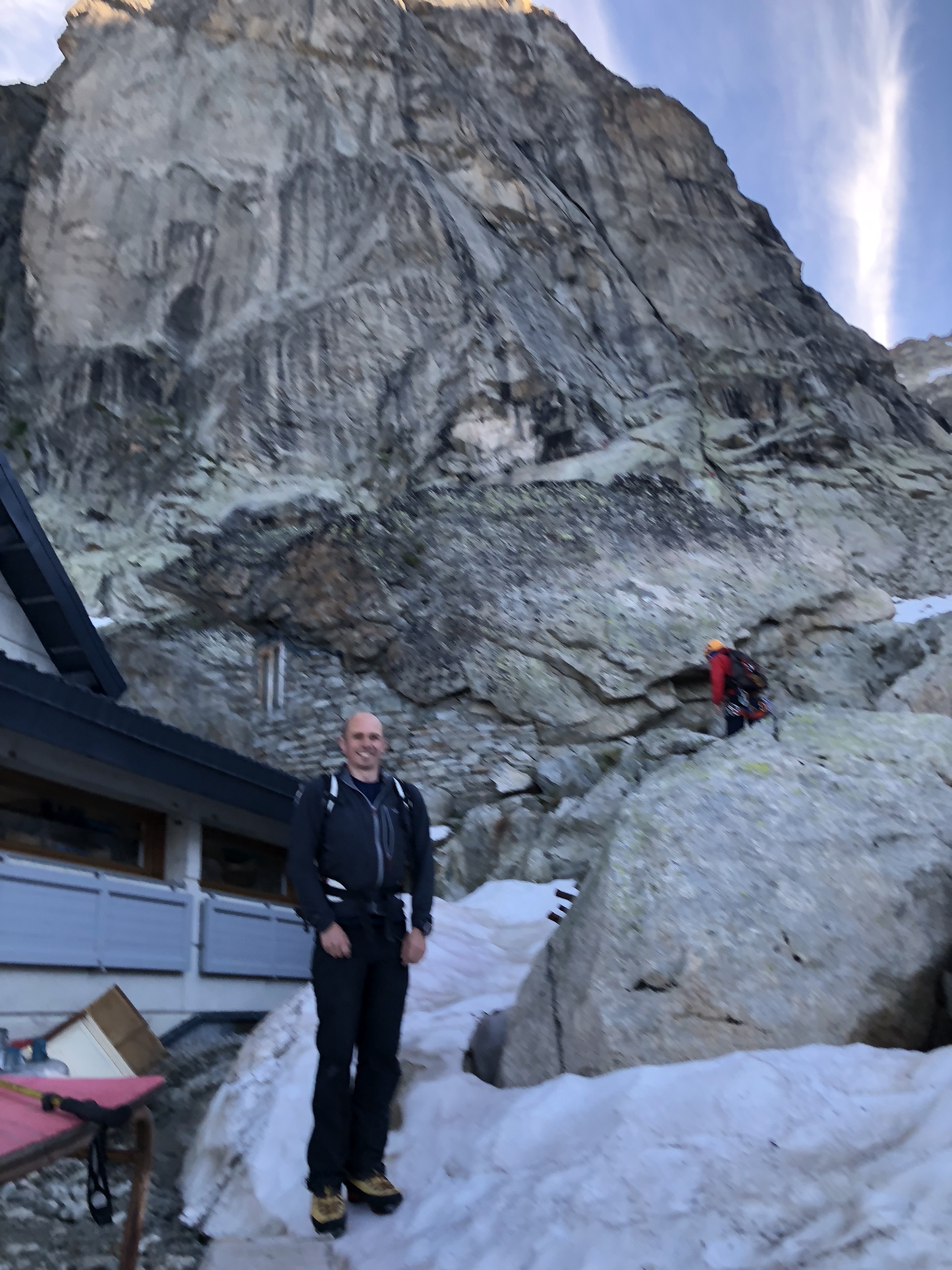 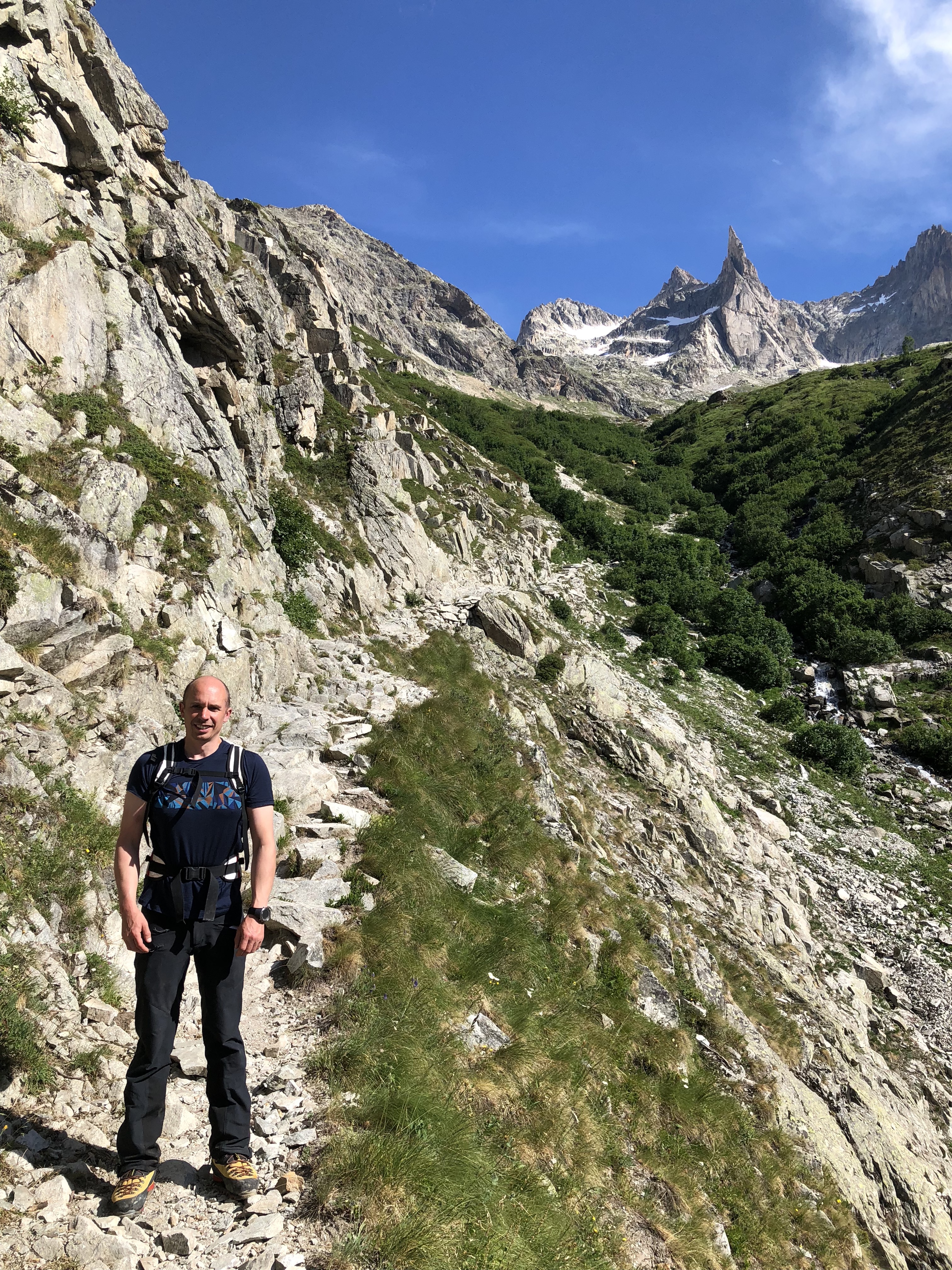 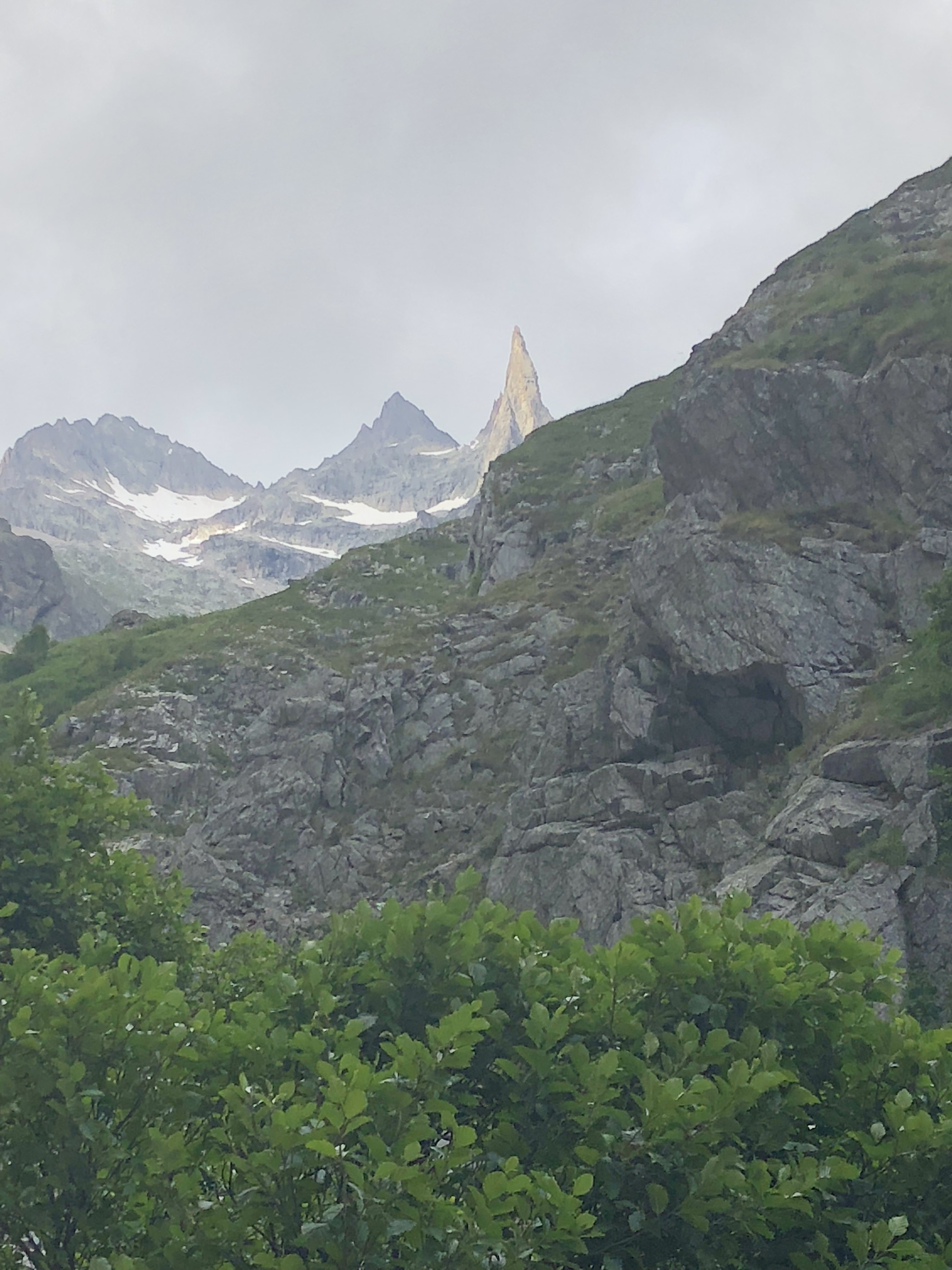 We headed back to the sanctuary of Maison Abeil on Wednesday, looking forward to sampling some more homemade muffins and bergamot marmalade and a bit of R&R. The thermal pools at les grands bains du Monetier, a 3 hour yoga class and a 7-course meal at the tiny Les Tables de Gaspard in Saint Crepan were the perfect way to round off our trip. 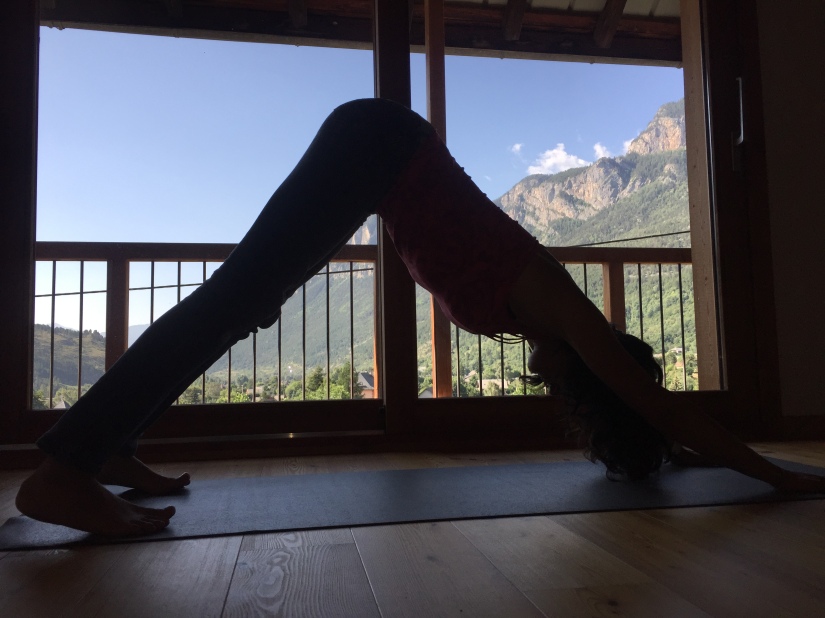 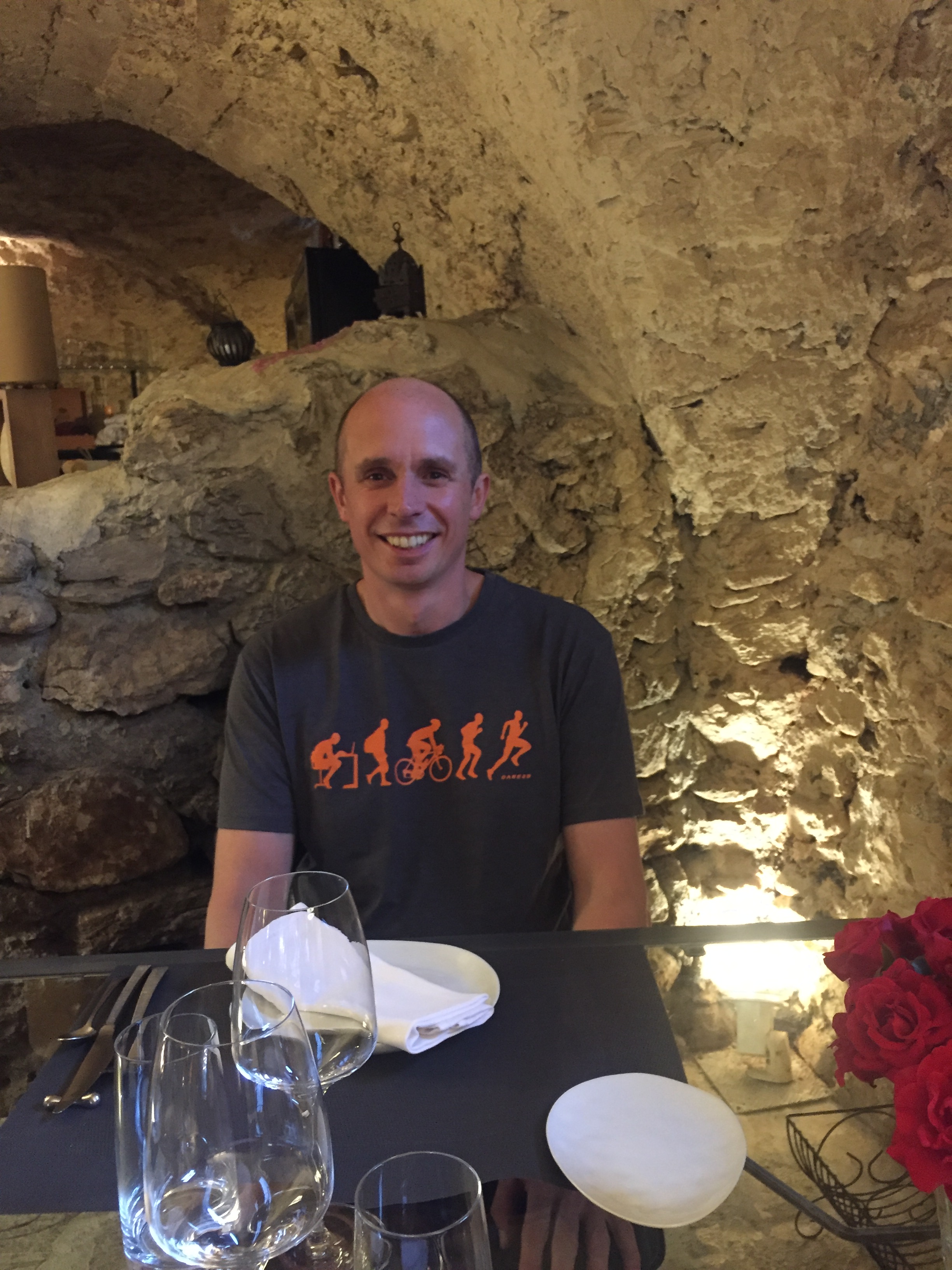 This week a sudden stratospheric warming disrupted our usual weather patterns. It brought exceptionally cold and dry air from Russia, and some great opportunities for ‘chasing the ephemeral’.

Dan and Rob were keen to take advantage of conditions as soon as possible and headed to Kinder to check out the Downfall on Sunday. They found the lower section ‘in’ but with much of the top section not fully formed had to head off route to finish. Fortunately some photographers from the Peak District Photography Facebook Group were there to capture the action. Huge thanks to Helen Gant for letting us share them here.

The usually dry air meant that the Peak got a fine dump of powder snow. Skiers recently returned from Arosa were keen to play. Andy ski toured around Comb’s Moss and Ross explored Grin Low while Dave and I practised skinning on Sir William Hill.

As Storm Emma met the Beast from the East conditions got gnarly, cutting Buxton off on Thursday evening. With plans for a winter climbing trip to Wales left in tatters by scouring 70mph winds and deep drifts, we decided to get our fix locally instead.

On Saturday Alan, Dave, Rob, James, Adrian and I headed over to Mam Tor, hoping to climb Blue John Rib (III). Super keen Alan and Rob roped up and got on the rib immediately. The rest of us decided to solo Mam Tor gully (I) to warm up and check out conditions. Beneath the veneer of snow and ice was as Alan described it, an unconsolidated pile of ‘kitty litter’. Alan and Rob decided against finishing Blue John Rib and after the sketchy top out of our solo I was relieved when we decided to leave Mam Tor for Back Tor.

The drive up Mam Nick road was the most perilous part of the day, with a near miss with an out of control taxi. After a brisk walk in into the fog we found Back Tor Gully (II). We climbed it in 2 pitches to prevent rope drag as the top belay was a fence post quite a distance from the tip of the climb. Bomber turf on the first pitch was followed by brilliant – but far too short – mixed climbing. We rounded off our grand day out with Black Sheep and Dalwhinnie in the Rambler Inn. 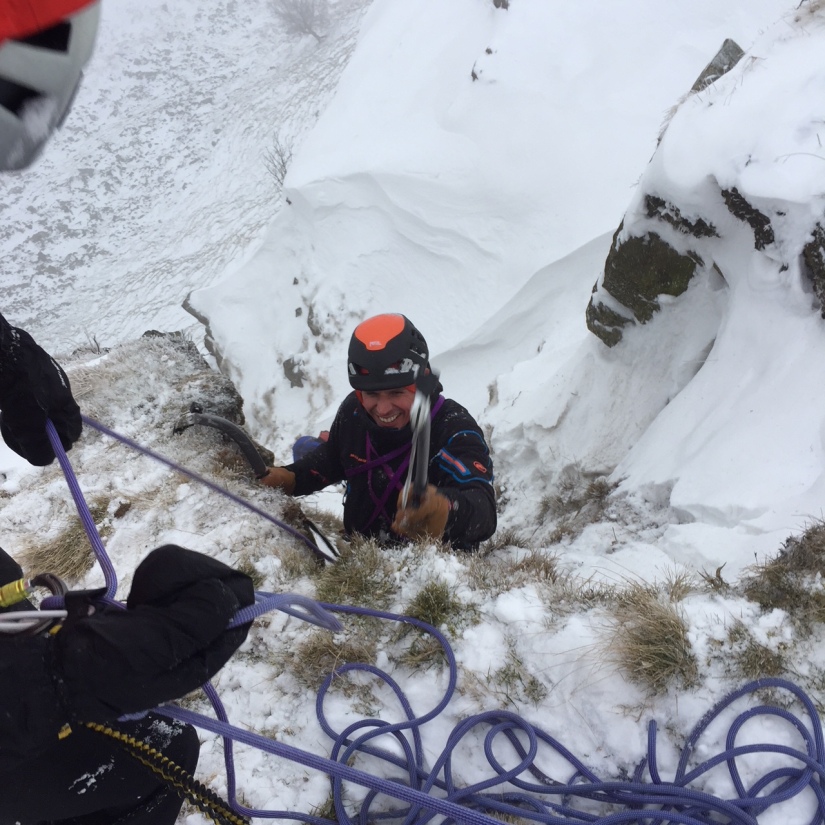 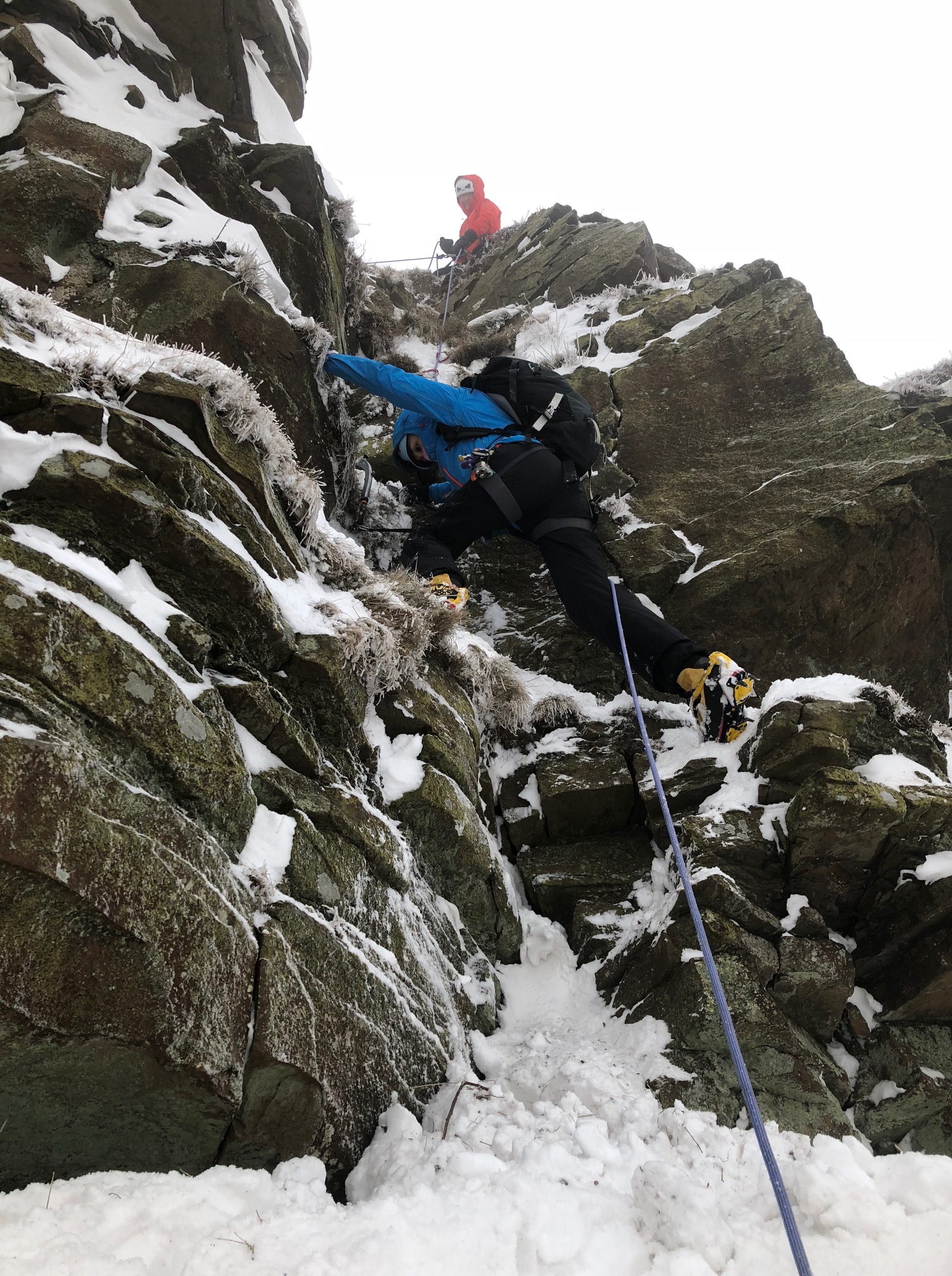 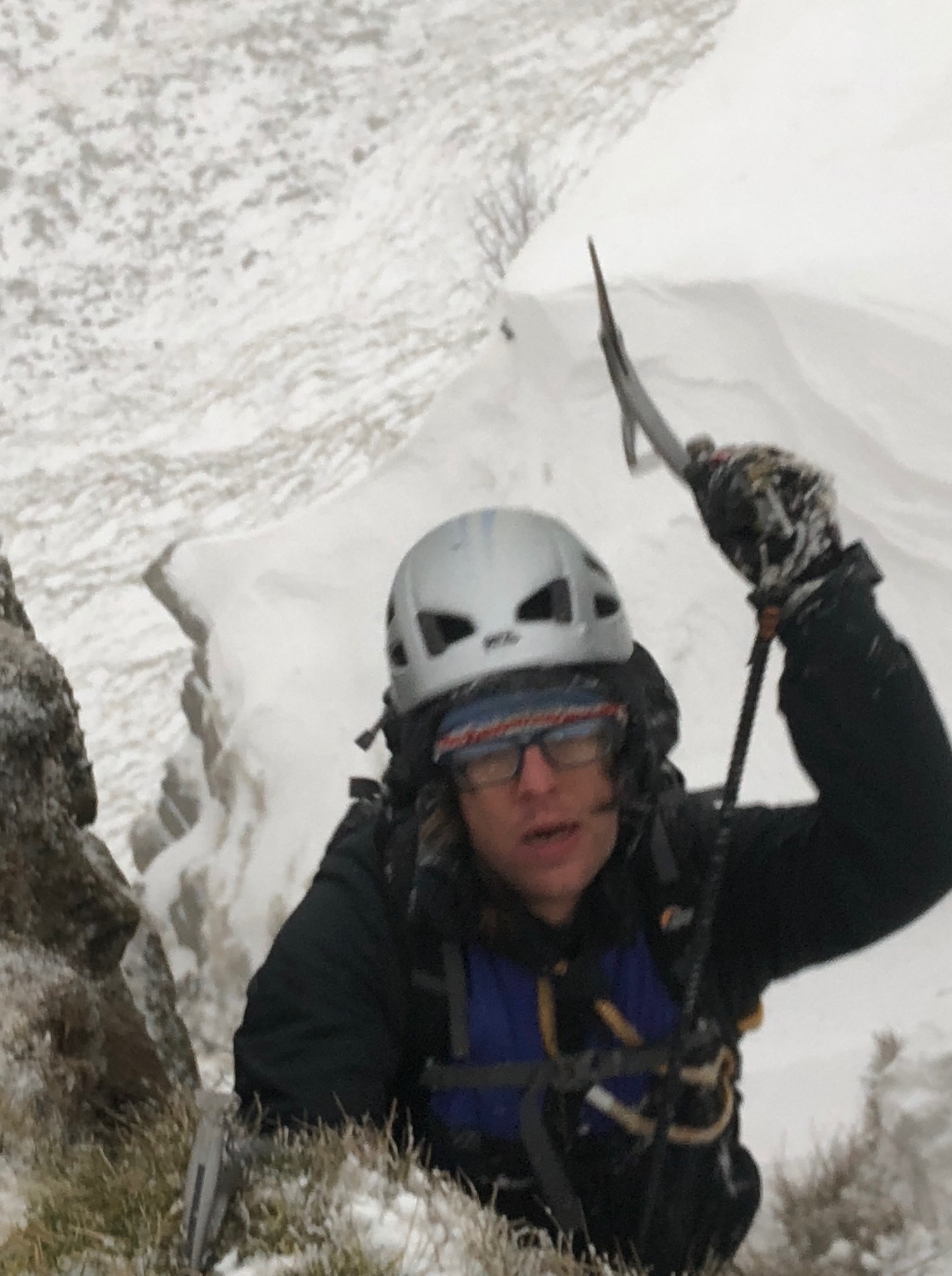