This is an enjoyable, interesting and thoroughly dangerous book of 528 pages, published in 2020 and according to Ed Douglas 25 years in the gestation. I was given a copy as a gift at a recent “significant” birthday.

Dangerous? I thought my final trip to the area would be a planned trek last summer 2020 up the Baltoro glacier, but then postponed. Now, after reading this I’ve added to that list: treks to Shivling, Nanda Dev and the Singalila Ridge in Sikkim. Each of those can be tackled late in the year as the nights draw in here and the clocks change. So, in effect extending the year. And dangerous also, because my reading has led me to order three more books for follow up certain aspects and people.

Many of the characters and incidents it describes  were either simply new to me or perhaps with better explanations than I’d had previously. Just a few which stuck in my mind are: George Bogle, the first “Westerner” to go to Tibet in 1774. The British/Nepali war of 1814-16 and it’s historically important settlement. The Gurkhas. The bloody history of the Nepali Royal families. Taking tea from China to grow in Assam and Darjeeling. The visit of the Nepal Royal family to Queen Victoria in the UK. Mummery’s untimely death on Nanga Parbat in 1895. Younghusband’s brutal assault on Tibet in 1904. That George Everest never saw the mountain. Alex Kellas, the little known mountaineer and forerunner to Bill Tilman who died in tough circumstances. How the current Dalai Lama was chosen aged 4 in 1939 and the position of the Panchen Lama. The Indo/China war of 1962 and Ngawang Sangdrol and the human rights injustices by China in Tibet. A thorough list really would be endless.

The book is good describing the ongoing political machinations over the centuries between Tibet, Nepal, China and the East India Company and then the British and India. And explains why Nepal managed to maintain it’s sovereignty despite at one stage in 1791/92 the Chinese at war coming within 35kms of Kathmandu. As would be expected from Ed Douglas, there is plenty of mountaineering history too.
I do have to say though that I would have expected more on Bhutan and it’s history, both ancient and more modern given especially that the famous Bird’s Nest Temple in Paro is on the cover.  There is very little of the British war against Bhutan—the Duar War—in 1864. And, nothing about the Lhotshampa expulsion of the Nepalese into refugee camps in the 1990s. (NB interestingly the US has taken some 80,000+ Bhutanese refugees and the UK just a few hundred). Nor, the coming of democracy there from 2007 on.

My only other slight criticism is that some of material, particularly the descriptions of ancient Buddhist sects or the various members of temples or royal families, is somewhat dense and needed reading more than once. To be fair, that’s probably a reflection on me!

An excellent tome, helpful maps and thoroughly recommended to get an overall understanding of the history of the Himalaya high mountain area.

Adrian and Keith 1-1 in Lockdown

Still in lockdown, we saw the weather was going to be excellent if a little chilly at the outset. So we decided on the Wildboarclough to Bollington stretch of the path. We were not disappointed, great views—8.5 miles, 470m ascent. Shots are Top of Shutlingshoe, looking south from Tegg’s Nose and Keith by White Nancy above Bollington. And, a beer in Bollington Brewery shop at the end! An excellent day and closing in on ending in Buxton.

So 2020 started off wet and drizzly and then….the world broke.

Coronavirus put paid to all of spring and much of early summer…. while some of us managed to get out cycling or walking it was late on before climbing restarted. It wasn’t all wasted time though, Stuart and Dell got involved with making some homemade PPE while Tim got reacquainted with his kiln.

Ready to be fired

Keith out on a ride

Eventually though members started to get out climbing though still mainly in small groups. Tuesday nights have restarted but often s crags ….so Same.Same.But Different. 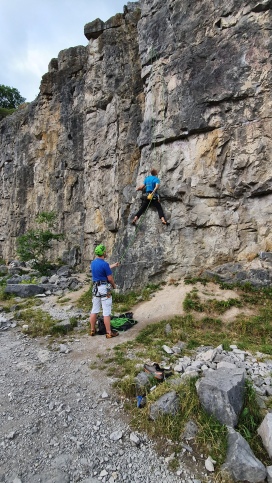 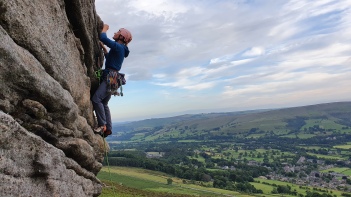 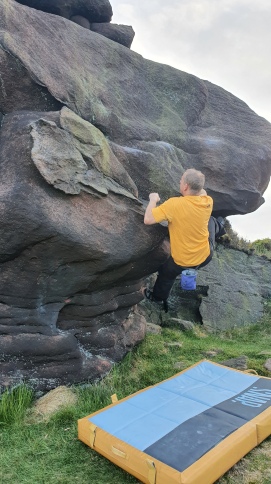 Hopefully this is start of a good late summer and autumn for climbing even if it is harder to meet up and climb like a club. Please continue to be safe both in the the ‘normal’ sense when out but also in the new world affected by coronavirus

Thanks to Tim for all the photos, if any one else has anything to say or show, please send your photos and some text to me.

Will it EVER EVER EVER stop raining. This year seems overly damp, and its not just that its rained a lot, its that any dry day seems to have fallen on a weekday.

AGM – The (ahem) highlight of the club year was held in October. All the committee appointments were re-elected and plans were made for the both the winter and for the following year.

Boundary Walks – Caroline has continued to organise and lead the ‘walking the boundary’ walks.

Club Bonfire – Its a great tradition, fire, chatting and snacks…. what could be better

Indoor Climbing – The club have been out most Tuesdays to a variety of walls.

Christmas Drinks –  A fabulous night at the Old Clubhouse in Buxton with a buffet, quiz and just a great chance to chat and catch up. Thanks to Tim for arranging.

So as we head into 2020 we have a few things to look forward to;

Tuesday night saw the club heading to Bamford… it was forecast to be a blistering one but in the end turned out to be merely really hot.

Simon and Ann on Portside

Bamford is always a treat to visit with it usually being quiet with lovely views and relatively polish free climbing and it didn’t disappoint. There was a good BuxtonMC turnout with some new and new-ish members making the trip to both climb and walk.

Most action centred on Neb  and Gun Buttress areas. The classics of Bamford Wall and Bamford Buttress saw many ascents 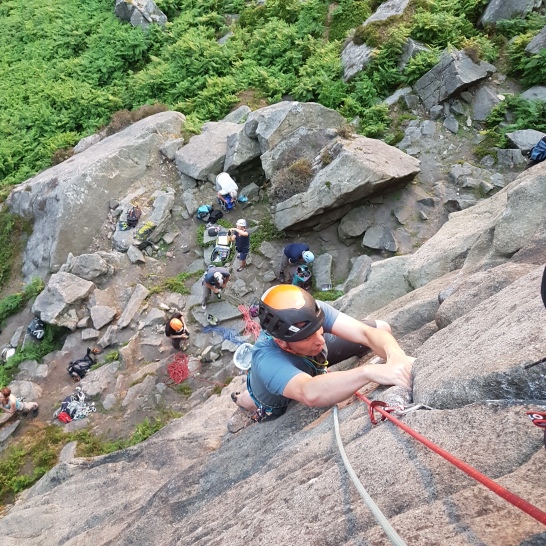 But also Neb Buttress Direct by Saffra, Jo and William

Saffra and Young Will on Neb Buttress Direct

So a pretty cracking night with the breeze high on Bamford making the heat bearable. Admittedly me and James ended the evening with a 40 minute operation to free a cam I got stuck.… but still better than any other way of spending a Tuesday evening.