So the news updates have been a bit lacking this season so far therefore a quick update is due after the first few meets.

The fine conditions continued and we got some good meets in. This season has seen decent numbers climbing at pretty much all the club meets with a handful of new people turning up. 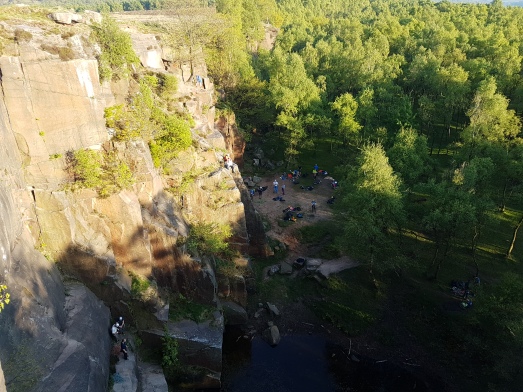 Looking down to Gingerbread Slab -Lawrencefield

Birchens, Roaches Lower and Lawrencefield have stood out for me as being meets where 15+ BuxtonMC members were climbing doing everything from Diffs to HVS (with mixed levels of success). A few years ago there was sometimes a risk of arriving at a crag and only having 3-4 members of the club there but now we always have a good show.

Even at Millstone where the weather looked menacing all afternoon 6 members risked it and had a great evening while others were climbing more locally to Buxton.

We have a had a few wet meets called off recently but now the nights are getting shorter (it’ll soon be Christmas) I’m looking forward to a string of good Tuesdays to keep things going.

May Bank Holiday saw Buxton Spring Fair taking over the town once again. In the past we have attended, the first one saw me being told I couldn’t dangle from a tree! but this year we decided to either Go Big or Go Home with our very own Hang Tough competition…. basically grab hold of a horizontal scaffold pole and hang on till you can’t hang any longer

Tim came up with the ideas and did all the practical work building a scaffolding rig so much credit must go to him. 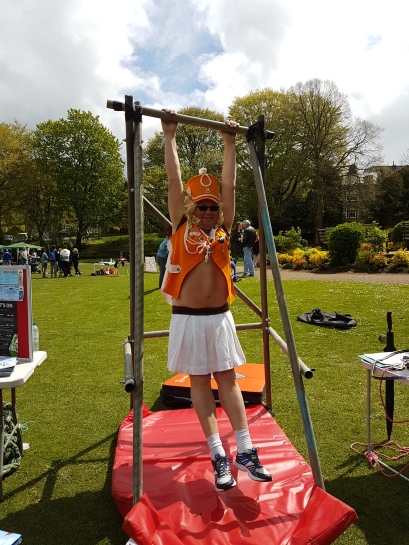 We were very fortunate that The Rope Race in Marple, Substation in Macclesfield and the BMC had provided prizes so we could run a genuine competition with out much outlay. We had a female, male and junior category which were all heavily contested.

It was a great day and we were busy the whole time through, often with queues of people waiting, at the end of the day we even had to turn people away….. some people hung for a 30 seconds while others, as you can see did some pretty impressive times 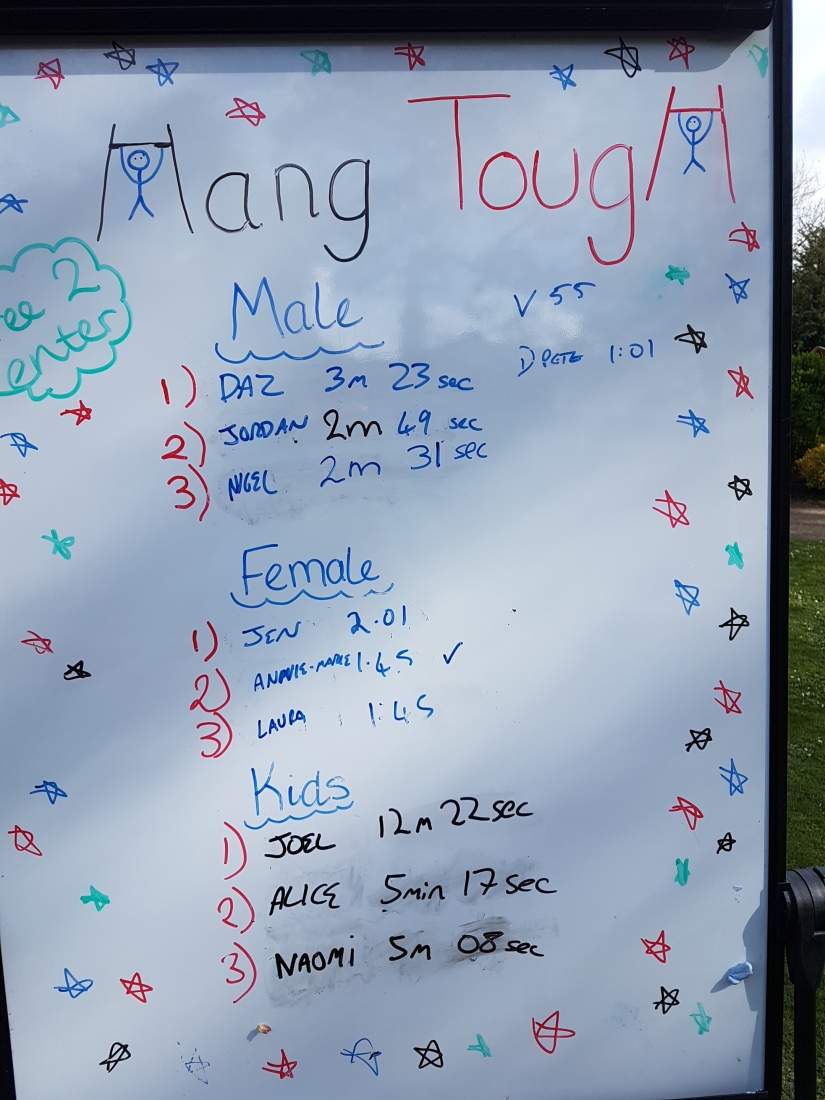 The stand out performance weas a young lad called Joel who blew the competition away, staying off the ground for over 12minutes. He has never climbed but won a voucher to go to the Rope Race kids climbing session… so maybe someone to look out for in LA Olympics in 2028!

The competition was great fun and it was brilliant to see everyone having a go but the real reason was the let local people know about the climbing club. Only a week later we have had direct contact with 2 people who we met on the day and another 3 have joined the BuxtonMC Facebook site and hopefully will get in contact soon. We also were able to signpost people to the Substation and to The Roperace for intro the climbing tasters as well, so maybe some of those will filter through to the club.

All in all a great day, so we will be back next year… as Tim pointed out, he’s built it now!

On Saturday I joined a hardy bunch to recognise and celebrate the 1949 National Parks and Access to the Countryside Act, the act that essentially allowed the setting up of the Peak National Park two years later 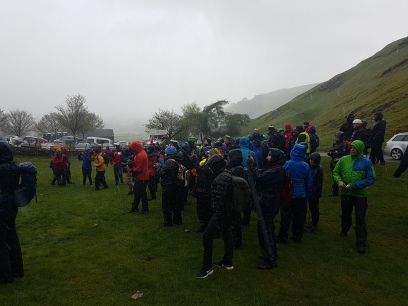 The Spirit of Kinder supported by the National Trust, Peak Park, Ramblers and the BMC was due to be held in Winnats Pass, where many rallies pre-Kinder Trespass occurred. The event was not well advertised… i happened to pick up a leaflet, plus a friend works for the NT.  This poor promotion was a blessing in the end as the church could not have held many people… but if the weather had been good, several hundred people packing out Winnats pass would have sent quite a message about the value of sustainable access to our Countryside.

After a few pictures were taken we returned to the Peveril Conference Centre/church for some speeches and a cuppa. Speeches were by Lord Blunkett, the CEO of the National Trust Hillary McGrady, Lynn Robinson the president of the BMC and High Peak MP Ruth George. Realistically though the most noteworthy and entertaining talk was by Pulp Frontman Jarvis Cocker.

Jarvis talked about his love of the Peak District and that despite living in Sheffield it was never somewhere he and his family felt they belonged until a school trip which non of his friends were looking forward to. The Countryside is now somewhere he goes for calm and inspiration. He is currently setting up and art an discovery trail that will start and end at Edale train station as part of these 70 year celebrations.

All speakers were keen to highlight that a lot has been achieved but that there is much to do. What remains is mostly around sustainable access and use of the national park, encouraging all people to come and visit but having as little of an impact as is practicable. Issues around erosion, re-wilding (including grouse moors), off roading and litter were all raised

The event came to a close with a number of ‘Elders’ of Kinder’ (including BMC Access stalwart Henry Folkard) passing the mantle onto a group of young NT volunteers in the form of swapping badges. Yes it was a bit twee but you cant fault the sentiment, Conservation now needs to be thought of in 50+year plans so the young generation are going to be needed to keep the NP, the NT and the governments feet to the fires.

So two meets into the new calendar and we have a 100% record  (shhhhh!)

A new addition to the calendar was a early visit to New Mills. This would not be really possible if it were not for the floodlights illuminating a decent amou t of rock and mostly the bouldering and sports routes on the viaduct pillar.

We had 5 or 6 members plus a person who had planned to pop down and say hello and were even joined by a climber who didnt know we were going to be there but was walking back on his communte from work. He then legged it home and grabbed his kit.

All in all an excellent meet.

The following week was Windgather and to be fair.. it all looked rather doubtful. Even driving through Whaley bridge i was mentally planning a walk in my head, but i got there and it was dry. Andy had been there from 4 and said you could see rain falling all around by not on Windgather.

Admittedly is was cold and we did have flurries of snow but a number of routes were led and even more soloed by the 6 or so climbers there.

A good start to the year… but dont say it out loud!

Alan Smith and Saffra Wright attended the BMC Peak Area Meeting as we had a particular interest in seeing the presentation by the RSPB and Derbyshire Police Wildlife Crimes Unit on Raptor persecution.
PC Emerson Buckingham of Derbyshire Wildlife Crime Unit gave an overview of different types of traps which are used in the Peak District some of which are legal and some of which are illegal.The context of how the trap is set sometimes determines if the trap is legal or not. For example a wire snare can legally be used to trap foxes but it is illegal to snare badgers. If the snare is set too low (in general under 9″ is considered too low) then it is probably illegal as the intended quarry is not foxes. Snares and other traps should be checked every 24 hrs and if this is not being undertaken then again it the traps are being used illegally.
PC Buckingham also emphasised that traps, such as the Fentrap – Mark 4, which may be set perfectly legally on the ground become illegal if placed (set) on a fence post. This is all connected with the target quarry of the trap, as if a trap on a fence post is discovered it is likely that the intended quarry is a raptor. His advice was that if a trap is found on a fence post to knock it off with a stick and photograph (and an OS grid ref is probably useful also). It is very important not to touch the traps as they can snap shut forcefully and damage fingers and hands. There are traps which are completely legal and these cannot legally be unset but a trap on a fence post will always be illegal. If in doubt he stated that he does not mind being contacted and sent a photo and neither would any other staff member of the wildlife crime unit. Snares can only be used for foxes legally. It
gets more complicated when it has to be considered if the snares are free-running (legal) or self-locking (illegal – due to animal welfare). So it’s worth contacting the unit if in doubt as obviously it is quite complicated and worth verifying before taking any personal action.
Mark Thomas of the RSPB emphasised the covert nature of operations of his unit and how they work with the Wildlife Crime Unit. Most of their work comprises collecting evidence for the CPS and assisting with police investigations. Mark emphasised that ring ouzel and even dipper have been found dead in Fentraps on posts as well as raptors. Mark also pointed put the stark contrast between raptor numbers in the White Peak, where they thrive, in comparison with the dark Peak where raptors are virtually absent. Obviously the significant correlation being with the location of grouse moors being in the Dark Peak.
The evidence that Mark presented showing that gamekeepers are responsible for many raptor deaths was compelling and graphic. A very interesting example showed that raptors die of natural causes in West Africa, in very remote locations, they are always found (the body is found) due to the satellite tag still be able to transmit even when the bird has died. That has been contrasted with raptors going missing on grouse moors where the tag simply stops transmitting so that even the dead bird can’t be found. Clearly the tags are being removed and destroyed in order to hide the criminal evidence.
Both speakers emphasised strongly that wildlife crime and specifically raptor persecution was a major problem in Derbyshire, with the Dark Peak, in particular, being a hotspot for it. Many members of the audience raised examples of traps they had found and asked questions about what could be done. Both speakers were clear that 999 should be called without hesitation should a definite wildlife crime be being witnessed. If the witness is less sure or it is evidence collecting rather than an active crime happening (perhaps if you find a suspicious raptor carcass or suspected poisoned bait) then PC Buckingham can be emailed with the details (probably with photos as appropriate) or there is a confidential Raptor Crime Hotline 0300 999 0101. This is very useful for people who perhaps work on an estate already or are perhaps on the property for another reason, with landowners permission, and might not want to jeopardise their current status. This is a free number and can easily be found with a simple google search.
In addition to the above the discussion it is timely in that a new study (published in Nature Communications on 19th March 2019) has recently revealed that a 10 year study has shown that hen harriers are ten times more likely to die or disappear on grouse moors than elsewhere. The data is compelling, highly statistically significant and is considered to represent irrefutable science based evidence of illegal persecution on grouse moors. The data set comprised a suitable large sample size over a suitably long study period to show this beyond reasonable doubt. More details on this report can be found at www.rarebirdalert.co.uk  or raptorpersecutionscotland