Despite some…well one major blip, I think the re-booted BuxtonMC Alps meet can be described as a roaring success. Between the group we ticked off alpine routes, higher altitude plodding, hut stays, multi-pitch and single pitch rock routes, mountain biking, via-ferrata, lower altitude walking and the traditional consummation of beer, wine and cheese.

What more could you want?

There was a reconnaissance mission led by Dave and Jaimella, their write up can be found here.

Ailefroide itself is a very small village… merely a few buildings. These building however include a newsagent, a very good gear shop, a Sherpa mini market, 3 pizza vans and various bars. These are all here to service the small town that is the campsite…. home to hundreds, maybe thousands of people but while we were there it never felt busy due to its vast size and varied camp grounds….. a home away from home. 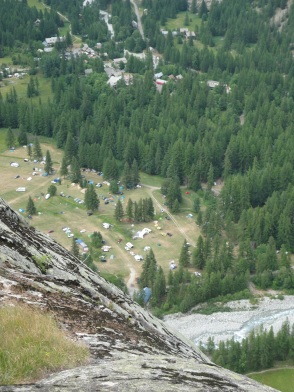 The BuxtonMC members it attendance were;

The number of people, plus the fact that within striking distance of the camp there were so many available activities means that a full write up on the 3 weeks that people were there is a Herculean task I am not willing to complete. Therefore I have created  a list of what was ticked until I left

I did three Via Ferrata (Via Ferrati ?), the first 2 with Alison and Darryl and the 3rd with Derek. Non really resulted in the height gain that I have experienced in previous VF’s. Others got me into positions that as a mediocre climber I probably couldn’t have done climbing free.  Whereas the first and last this trip were up canyons/ravines with limited steep ground. The 2nd was up a face and the most consistently ‘up’ but again didn’t give the exposure I have come to associate with VF…. still entertaining though. 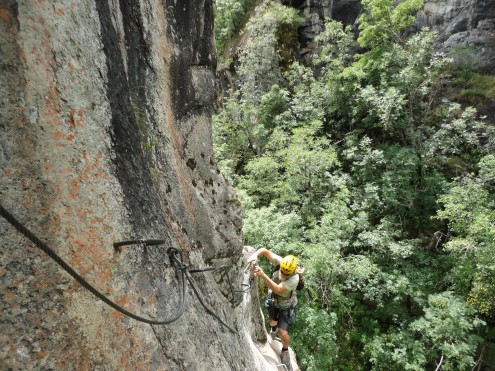 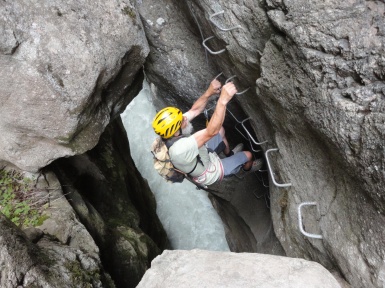 What seemed like a 25 min forced march could have been a leisurely 40 min stroll from the campsite but Derek and Rob seemed on a mission. Those two went to climb another route so I teamed up with Alan and then Dec with Adrian.

It was a 6 pitch route which Derek assured us,  as it was the afternoon would pass into the shade imminently… therefore myself and Alan decided on the ‘big drink of water before setting off and don’t carry anything’ approach.

The first 2 pitches were fairly easy going, a nice introduction for me after a while off climbing. The 3rd pitch was much harder with a optional point of aid and then, what felt like quite a necky traverse. The 4th pitch was also committing and steep but was followed by a nice scrambley 5th. The 6th was a stiffer arete type pitch but with all you needed at the right time. 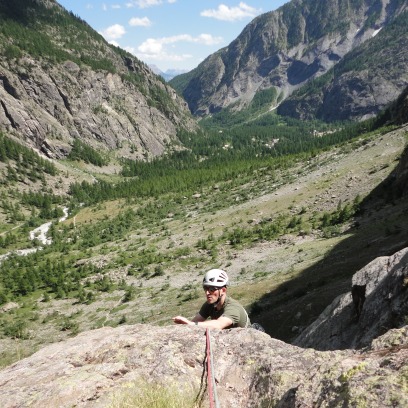 By the 4th pitch it was clear that Derek had misjudged the transit of the sun and we were still in full glare and parched to say the least. Derek then realised that when he was climbing in the shade 2 days ago with Alison…. it was a totally different climb and a totally different face! so on we battled to the abseil station with dry throats and dreams of iced water. 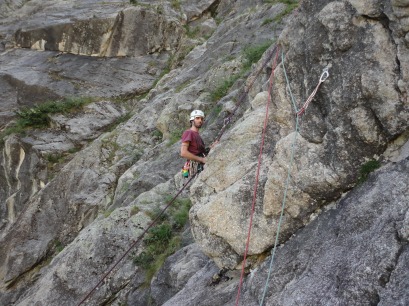 As most of you are already aware, the descent is a story in its own right, and a story for someone else to tell. Its fair to say though that it was a little while before I was going to be satiating my raging thirst with the bottled water at the foot of 3 abseils.