On the last day of really good snow conditions in the Buxton area (before the Atlantic mild conditions swept in overnight).

It was cold but gloriously sunny when we set off from Buxton at 10.45. Cycling to Harper Hill on clear roads, we then soon went off road on the fairly new bridleway that goes up to Staker Hill. This was snowy under wheel from the start and consistently uphill, on the steeper sections the snow became deep enough to stop progress. Just what we wanted!

We arrived nearly at the crest of the hill when my freehub ceased to function, the pedals going round, but no engagement with the drivetrain. After banging the back wheel on the ground hard a few times, which did no good, we stood around for a bit going through the various options. Emma Jo had heard that in these cold conditions, if you urinate on the freehub the warmth could possibly get it working again. Well, I thought, “I don’t want anyone pissing on my bike”, but after a few more attempts, I gave up knocking the back wheel.

We stood around for a few minutes, Derek and I looked at each other and shrugged, no desire to urinate from either of us. Rob said that he might be able to squeeze a bit out. He shyly performed said operation and by a small miracle, it worked! 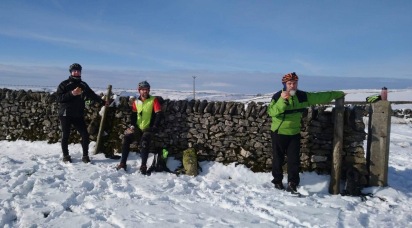 Quick, back on the bike and pedal over the snow like fury – thankfully we weren’t troubled by mechanical problems again. In absolutely glorious sunshine and, in places deep, firm (but not too hard) snow, we made off road progress. This is not to say that it was fast going , with much sliding, laughing and the occasional fall in the lovely snow. Did I mention the views, a blanket of shiny white over Axe Edge, Chrome Hill and beyond. It was better than we could have hoped for, so many photos were taken. 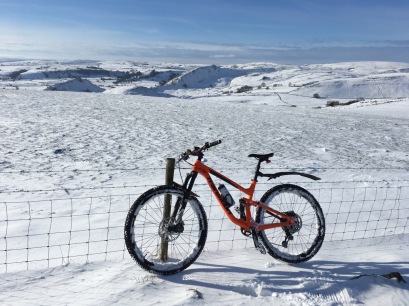 Our route took us over the hills off-road to the bridleway above Hindlow quarry (tricky uphill progress in snowy ruts), then a wonderful flowing descent to Earl Sterndale. Up and over past High Wheeldon, we crossed the A515 just north of Pomeroy and had to go past John and Jean Rout’s isolated and lovely house, so we popped in for a cuppa. It was very nice to see them and catch up, and the chocolate biscuits were great too. The selfie sums up the mood, although I wasn’t aware when I took the selfie that there was the spiky leaf of a plant in front of the lens. Never mind, we’ll edit that out later (doh!).

The icicles on their shed were truly spectacular. It was very difficult to leave the warmth and comfort though to get back on our bikes, but daylight hours are quite short at this time of year.

Straight onto the Pennine bridleway and snowy back roads to Taddington. Then the slippy and slidey Priestcliffe descent down to Millers Dale – loads of fun.Due to the pressure of time we decided to just head back to Buxton the quickest way (Monsal trail and A6), arriving home just as the rain started.

PS – The next day I cycled in the same area with Neil Pitts, who happened to be visiting the area, and the snow had virtually all gone!